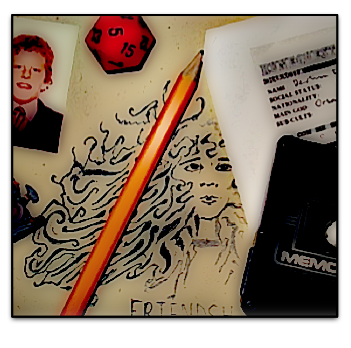 An introduction to playing table top games online and a call for tips.

This weekend was the first ever Saturday Morning Grog Club. These are occasional online games that I’ll be running to help support the Podcast. They’re intended to help us refresh our memories about how the games work in play. This weekend was the turn STORMBRINGER, ready for the podcast due later in February, which I last played 33 years ago.

It also included my first ever meeting with @dailydwarf … I virtually know him now.

I’ll be reviving old school games online at irregular intervals. Look out for a ‘call for players’ on this site over the coming months. AD&D or Tunnels and Trolls is likely to be up next.

It’s all part the 2016 strategy of packing in as many sessions as possible into every hidden corner of the week. Since we revived our interest in the hobby five years ago, it has been frustrating attempting to find the time for us to be around the table. Every planned session has been foiled by the demands of ‘the toad’ work and family life: “sorry I can’ t do Wednesday, its parents’ evening … Etc.”

The availability of online platforms like Roll20 has increased the potential of playing more game sessions as it reduces the palaver of getting in the same physical place at the same time. On top of its convenience, it has many features to enhance the game-playing experience, including the facility to load maps and reveal them as places are explored and animated dice to recreate the full experience of rolling across the table. There are features on the application that we haven’t used yet, for example, we’ve been using off-line PDF character sheets, Roll 20 has the facility to create interactive character sheets which are more accessible during the run of play.

This month, we have managed to play an unprecedented four sessions, only one of them being face-to-face around a real table. Remarkable.

In addition to the extra sessions, the online game has introduced us to more players, with all the richness and excitement that bigger parties can inject into a game. There are only three of us usually, so we have to double up character sheets and scale down pre-written campaigns to suit smaller groups. Having 5 and 6 different players with different perspectives and experiences has enlivened our approach to the game.

Following the last two sessions however, I’ve been struck by a troubling realisation: I talk too much. When I’m GMing online, I feel a constant need to keep going, keep the pace up, fill in the gaps with wiffle and waffle.

My usual style of Games Mastering consists of throwing forward a situation, sitting back while the players explore their ideas, only adding the occasional dramatic poke when the momentum drops. I’ve realised that when I’m GMing online, I’m doing twice the amount of talking that I would normally do at the table. Why? Why does the online experience cause me to become so voluble?

THE CONDITION OF MUZAK

Some of this can be accounted for in the conditions imposed by playing in ‘stolen moments’. Our regular Traveller session is a continuing campaign (The Aramis: Traveller Adventure), but it is designed in an episodic nature, hopping from planet to planet, with an over-arching plot that seeps into the episodes. These are 2 hour sessions (we have been remarkably strict in sticking to this timescale too). I have tried to achieve the dramatic beats of a continuing TV drama, with the action packed into the final third, and some tantalising cliff-hangers.

We’ve managed to achieve a sense of rhythm in play and the recent session was a scene of riotous fun as a planned rescue of a crew member from a church where he was being held captive, turned from genius to ridiculous by turns.

Despite the fun we’ve had playing the individual episodes, I have no idea how much the players are engaging with the overarching plot. There’s a conspiratorial narrative in the background that they’ve touched on and it will become increasingly important as time moves on, but at this point, I don’t know whether they’ve picked up on the elements of story, or the whether they’re even interested in pursuing it further. This could be down to the design of the adventure itself as it is written with lots of exposition, which I’ve tried to translate into action. I can’t help feeling that if we were playing around a table, I would be able to judge it better. As a consequence, I feel like I’m trying to over-compensate with information outside of the game, usually lengthy write ups on the Roll 20 forums.

The Saturday morning game was an adapted version of THE FANG AND THE FOUNTAIN from THE PERILS OF THE YOUNG KINGDOMS for Stormbringer. The next couple of podcasts will be all about the game, so I won’t steal my own thunder here. The structure was adapted to suit a one-shot:

The session worked well, with dice ‘virtually’ rattling around the screen, with death and destruction and body horror and demons and everything … but, it was hard-work, too much like hard-work. I don’t think it was down to injecting the scenario with usual energy that’s needed for a one-shot/ convention-like game, I think it was down to the channel … I was over-compensating for something lacking in the online experience.

I don’t blame my players for this lack of engagement, they’re all intelligent, love RPGs, witty and want to get the best from the experience as possible. My incessant talking comes from the limitations of the online experience.

Firstly, even the reliable Roll20 can be a glitchy experience, because you are depending on many factors: the speed of broadband, individual wifi arrangements, the processing speed of your computer and the performance of the servers. If this is multiplied across 6 people, there are many opportunities for it to fail.

This usually manifests as warble from the sound, or a player web-cam disappearing momentarily.

Secondly, most people tend to stare blankly at the screen.

Combine these two elements and it results in me becoming like Lee Evans on speed. My internal monologue is going like this: “Have they heard me?” “Has the screen frozen again … he hasn’t moved for 5 minutes” “If I keep repeating the same thing … they’ll get it … I’ll say it again just in case”

In the last Traveller session, the conditions worked well because the party had split and were talking to each other by communicators. However, there was a point on Saturday, where I described a scene where a man was ringing a bell. A mist emerging over the beach, with children running towards the sea, the bell ringing intensified … the children screamed within the mist!”

Players confer, followed by … “We’ll go and talk to the man and ask why he’s ringing the bell.”

but … “The children are SCREAMING!”

As I say, I don’t blame the the players, it’s something to do with online playing. It’s the strange way that staring at each other in little inch by inch windows on computer screens, renders normal human discourse inert.

It’s really difficult to encourage players to engage with each other. Normally, around the table, there are visual clues of when to take a turn to speak, or gestures of encouragement when someone has had a good idea. Online play seems to eliminate these clues of interaction that we take for granted.

Online tabletop games are a relatively new phenomena and I’m new to it, so like anything involved with RPGs, it will improve through playing more and players sharing tips and experiences with each other. I’ll get better at it as I do more of it because I’ll naturally want to get better.

I’ll just want to stop hearing my own voice.

11 thoughts on “A glitch you cannot scratch …”