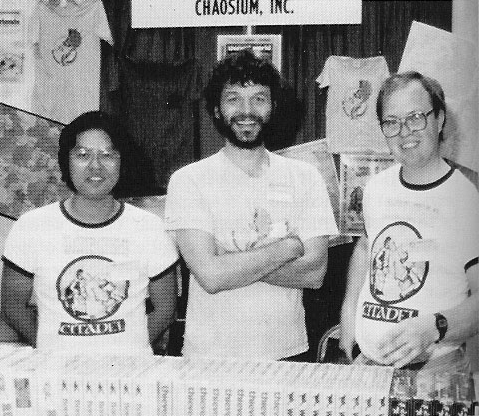 In a break with the usual format, The Armchair Adventurers are at risk of disappearing up their own fundament.

It’s too short to break in two, too long to listen in one go, so disappointing either way. Take your time, pause a little, as you listen to the blow by blow account of our big day out.

It’s 30 years since we last went to a Games Convention. We went to Dragonmeet ’15 in December, this is a reflection on what we did when we were there and how things have changed in gaming in the meantime.

This introduction includes a A brief potted history of Dragonmeet, with extra bits of information provided by Modiphius.

The morning of the day before, Judge Blythy joins Dirk as we plan the trip and reminisce about Games Cons of the past.

Everything comes back to White Dwarf and it’s coverage of Games Conventions back in the day were our way of enjoying them vicariously.

There’s a quote from Scott Dorwood who reviewed the podcast.

Some general reflections on our observations while we were there as well as a blow by blow account of some of the experiences we had.

How the market has changed, stuff we bought, and the apparent controversy around the benign Chaosium seminar.

We attend seminars featuring Ken and Robin Talk Quickly About Stuff and the “Is there too much Cthulhu” debate between The Good Friends … and The Smart Party.

While we were there, we interviewed Mike Cule, star of the stage and screen, and the author of RUMBLE AT THE TIN INN (amongst others) and one of the hosts of Improvised Radio Theatre with Dice.

Eddy, the resident bargain-hunter in chief, shares his Dragonmeet haul and takes on the 20 quid challenge.

Normal service will be resumed next time when we discuss STORMBRINGER.